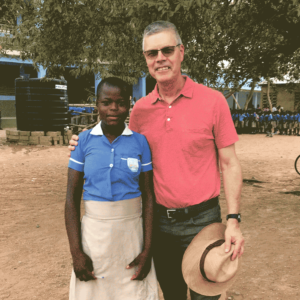 THEODORA IS IN CLASS SIX AT CONCORDIA PREPARATORY SCHOOL AT LEADACHILD’S PROJECT SITE IN GHANA. IN A SCHOOL WITH 800 STUDENTS, SHE IS ONE OF 300 WHO ARE MUSLIM. THROUGH ATTENDANCE AT THE CHRISTIAN EDUCATION CLASS AND WEEKLY SCHOOL CHAPEL SERVICES, THE HOLY SPIRIT WORKED IN THEODORA’S HEART…

One Sunday, Theodora was found in the church at Kpagogo, Ghana. When asked what brought her there, she said, “In school, I have learned many things about Jesus who loves me. I have come to church so that Jesus will help me.”

The Pastor called Theodora’s father and shared with him his personal story of converting from being Muslim to being Christian. He also asked permission for Theodora to continue attending worship. While her father clung to the idea that “all religions are the same because we all worship one God”, he reluctantly agreed for Theodora to attend worship.

During the next few months, Theodora shared with her father what she was learning in school and at church about Jesus. He liked the Child’s Garden of Bible Stories and was pleased by the knowledge and wisdom his daughter had gained. Through the working of the Holy Spirit, Theodora’s father, too, was blessed with faith in Christ. He said that the Muslim faith forced him to do things he could not do.

Theodora has been taught the Scriptures, baptized and confirmed. It was on her baptism day that she took the name Theodora, which means, “gift of God”.  She participates in youth activities, leads the children’s choir, and reads the Scriptures on Sundays. Theodora is now bringing her grandmother to church.

Supporting the ministry of LeadaChild means that more children around the world, like Theodora, will hear the Good News of Jesus.